Words of Wisdom – Character Does Matter

On Monday, Feb. 10, players from St. Francis high school basketball team, alongside coach Erin Dwyer and former Marine and current FBI agent, Vick Lombardo, had the opportunity to speak with Wyndemere resident and WWII Veteran, Howie Chittenden on the importance of character and selfless service.  His experiences include being captured as a POW during WWII and being held captive for almost the entirety of the war.  Howie authored a book about his experience and shared with the group the importance of service to others, including neighbors and country.

As Howie approaches his 100th birthday this year, he had plenty of sage advice to share with the young men.

The players are working to support the Travis Manion Foundation, whose mission is “to create a nation of purpose-driven individuals and thriving communities built on character, that is, selfless service to others and an appreciation for one another.  TMF does this effectively through Service Expeditions, in which families members of fallen heroes serve others in honor of their loved ones, through transition support conferences for veterans so they can be successful outside of uniform, and through TMF’s “Character Does Matter” Program, which provides leadership courses & service projects for youth across the nation to reinforce the TMF motto of selflessness, “If not me, then who.”

Travis Manion Foundation (TMF) was founded by Col Thomas Manion to honor our fallen military heroes, to include his son, 1st Lt. Travis Manion, killed in Iraq in 2007, and his US Naval Academy roommate/US Seal , Lt. Brendan Looney, killed in Afghanistan in 2010.  For the last 12 years, and after burying these two Fallen heroes side-by-side at Arlington Cemetery, TMF’s mission has been to empower veterans & the families of our fallen heroes to develop the character of future generations through servant leadership projects in their local communities. 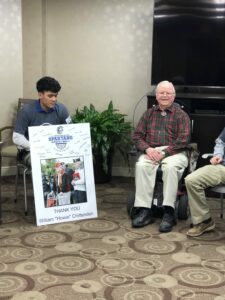 More questions about our community and services. Contact Us.

Take advantage of our current 2022 savings!
Come see our newly remodeled apartment homes and learn how you can save up to $52,000!

This is for testing purposes